Season opener will be the very special game!

***** April Fool Joke *****
BigBlue produces BB-METAL who was born with the oracle of Pig God.  BigBlue has decided the season opening game vs Tokyo Gas CREATORS will be the special game.  The game will be named as "Pig Bowl" and special design uniform and headgear will be utilized in the game.

What color do you image for Pig God?  It must be shocking pink color!  So BigBlue will paint the current blue-colored headgear shocking pink.  And BigBlue will replace the current decal "B" with "P" to express our respect for Pig God.  Furthermore, "BIGBLUE" logo on the back will be changed to "PIGBLUE".  The image of these special uniform and design can be seen as follows. 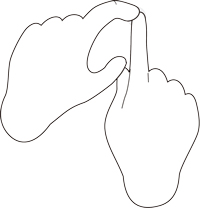 In the game, we strongly recommend all of BigBlue fans figure "Pig Sign" by hands and transfer power to BigBlue.  It is easy to make "Pig Sign."  As BigBlue members can see it as "P" character,

We will look forward to seeing the home side stand will be filled with "Pig Sign" at the game on May 14th.  Go for it!